How do turbulent superstructures interact with skin friction drag?

The Institute of Fluid Mechanics (ISTM) is part of the DFG Priority Programme 1881 titled "Turbulent Superstructures", which aims at understanding how superstructures - flow features that have a typical size comparable to the largest lengthscale of the flow - affect the dynamics of different turbulent flows. A detailed description of the scope and goals of the DFG Priority Programme 1881 can be found here: https://www.tu-ilmenau.de/turbspp/ .

Turbulent Superstructures (TSS), large connected regions of relatively low or high velocity, are known to cause strong large-scale velocity fluctuations and have been recognized to play an important role in the dynamics of turbulent flows.

In a similar fashion, flows with secondary motions of Prandtl’s second kind, e.g. generated by spanwise inhomogeneous surfaces, provide a flow scenario with the
simultaneous presence and interactions of large and small scales at moderate Reynolds numbers. The generated flow resembles TSS in respect to scale interactions, enabling to study this scale interaction phenomena which is otherwise difficult to assess. The secondary motion can thus serve as a model system for TSS that occur over smooth surfaces in higher Reynolds number flows.

Figure: Time averaged streamwise velocity U obtained from hot-wire experiments at Re_b = 18000 . The strong bulges in the mean streamwise velocity are a direct result of the secondary motion. Intersection of dashed lines indicate the measurement grid.

In the present study, the influence of large scale flow structures on the near wall region, i.e the wall shear stress will be investigated. Channel flow configurations exposed to spanwise surface heterogenities generating large-scale secondary motions, as shown in the figure below, will be studied both numerically and experimentally.
The aim is to understand how TSS contribute to skin friction drag through detailed analysis of the momentum exchange between the fluid and the wall, interpreting the related scale interaction and their Reynolds number dependence.

Second SPP-project at ISTM: Interactions between superstructures and other scales of turbulent flows by Davide Gatti

Within the Priority Programme our institute focuses on understanding the role of superstructures in generating skin-friction drag and to study the opportunity to control them. 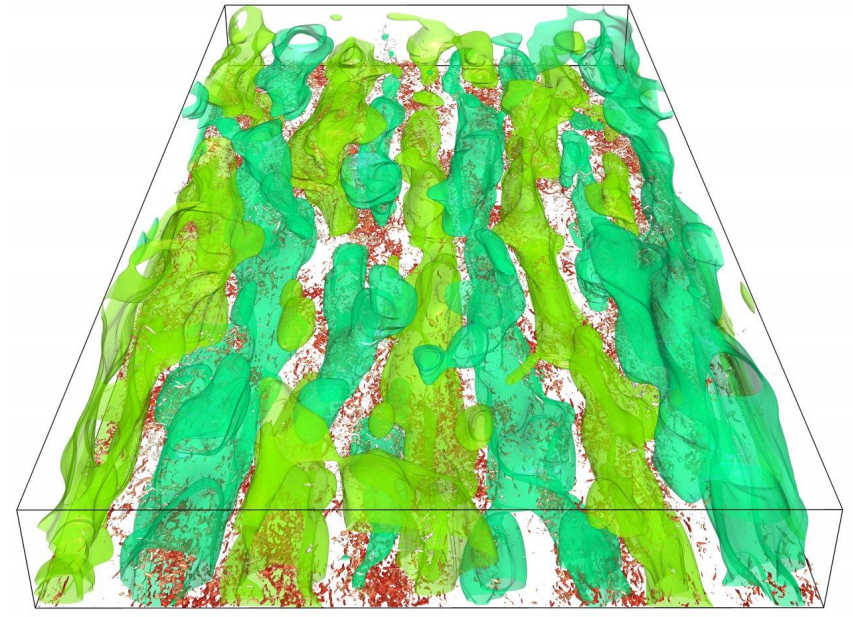 In the figure above you see the smallest (red isosurfaces) and largest (green isosurfaces) structures in a turbulent channel at friction Reynodls number of 1000. The former have been visualized as isosurfaces of a vortex identification criterion and the latter as large-scale positive and negative velocity fluctuation, identified within the flow via Empirical Mode Decomposition.